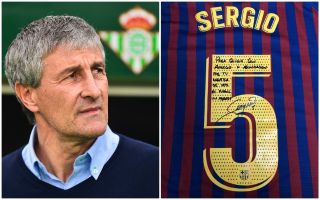 Barcelona have announced the appointment of new boss Quique Setien and that could be music to the ears of Sergio Busquets.

The Catalan giants made the news official on Monday night, with Ernesto Valverde being sacked and replaced by the former Real Betis boss who has penned a deal until 2022.

SEE MORE: Barcelona tipped to do something they haven’t done in 17 years with announcement expected

The 61-year-old received plenty of praise during his time at Betis for the style of play they adopted under him, with many comparisons being drawn between them and the Barcelona way.

With an emphasis on creative freedom and possession football, it was easy to see why even back in 2018 that Setien was being paired with the Barcelona job one day, and now he will get the chance to prove himself at the Nou Camp.

As seen in the tweet below which was posted after a 4-3 win for Betis over the reigning La Liga champions, Busquets sent a special gift to Setien after the game as he wrote a message to the tactician on his jersey.

“For Quique with appreciation and admiration for your way of seeing football. A hug.”

The pair will now get the chance to work together and take Barcelona forward, and it’s not a bad way to start for the new boss knowing that one of the most important and influential figureheads in the dressing room is already on board with his approach and philosophy, and it bodes well in terms of others following too. 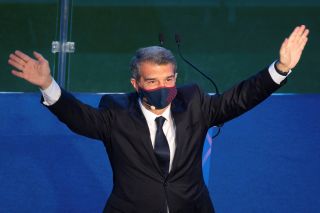