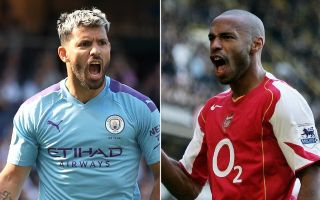 There’s been some debate doing the rounds today about Sergio Aguero vs Thierry Henry as the greatest striker to play in the Premier League.

In the process, the Argentine also becomes the highest scoring overseas player in the top flight, and also sits top for hat-tricks, with 12 in total.

While there’s no doubt Aguero is a world class forward of the highest order, it seems the people have spoken…and they still think Arsenal legend Henry is the best…

A poll put out by Sky Sports this morning has ended with a result of 63% voting for Henry, and just 37% for Aguero – a comprehensive victory for the Frenchman.

Many fans, seemingly from a number of clubs other than just Arsenal, have also left comments suggesting there’s really very little to debate.

While Aguero is clearly an immense goal-scorer, he perhaps loses points for generally playing in an expensively-assembled City side that have dominated the division since his arrival in a way that was not as consistently the case in Henry’s time at Arsenal.

The Manchester City talisman has now also scored more hat-tricks (12) than any other player in the league's history.

One of the best.

On top of that, the former Gunners hero tends to be seen as a better all-rounder, having also been a prolific creator of goals, whilst scoring a variety of strikes from long range or with the help of his dazzling dribbling skills.

Here are some of the responses to the debate…

Henry every single day of the week. It’s not even close.

As a Man Utd fan… it's not even close pic.twitter.com/s6kOzuX35k

Henry is the best Premier league player of all time

I remember Thierry playing at Anfield once, he got subbed and the whole ground gave him a standing ovation, it was that good.

There is only one correct answer to this poll. Anyone who voted Aguero is a child. A literal child. They haven't seen Henry play.

Saw comparison stats, when Henry had this amount of goals he also had 30 more assists than Aguero at this point. Also, this goal: pic.twitter.com/JCRD1V3dzK

Henry can take the ball from anywhere and just dribble past people and score and do everything else that aguero does.

Henry a better all round player.

Henry every day of the week and it's not close imo. Aguero's a great goal scorer but Henry had it all. The guy still holds the record for most assists in a premier league season. Complete striker.