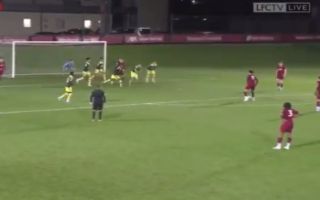 It seems fair to say that this goal won’t mean as much to Curtis Jones as the cracker he scored against Everton for the first team, but he’s continuing to show that the goal wasn’t a fluke.

He’s back playing for the U23’s tonight against Southampton and scored this absolute cracker from the edge of the box:

?| Curtis Jones with another curled finish outside the box! ????pic.twitter.com/X8kGjs6Z7d

The way he strikes the ball is just lovely to watch. It’s not about just thumping it as hard as he can, his technique is so good that the balls flies and swerves in the air and it leaves the keeper no chance.

Hopefully he continues to impress and we see this in the first team more often.