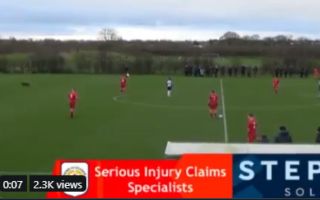 You sometimes see the occasional video where a dog gets loose and invades the pitch, or even some chickens if you happen to player lower league football in Croatia, but this might be a first.

Bolton and Crewe’s U18 sides played at the weekend and the game was going well, but then some deer invaded the pitch:

? | Oh Deer, oh Deer!#CreweAlex Under-18s had a few unwanted pitch invaders during their game with @OfficialBWFC over the weekend…? pic.twitter.com/kZfc8Etnl4

We’ve all seen the damage a deer can do to a car if someone crashes into one, so it must be pretty terrifying to see them flying past you at full speed.

It seems there were no collisions and the game finished without any issues, but this might be a footballing first.