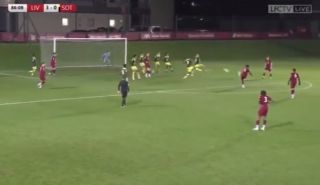 Liverpool youngster Curtis Jones has scored another quality goal, this time for the club’s Under-23s as they thrashed Southampton.

Watch below as Jones, who recently made a name for himself with a stunning winner in the FA Cup clash with Everton, curled in a similar strike to make it 4-0 in this U23s game against Southampton.

Liverpool ended up winning this one 5-0 as their youngsters look almost as good as their high-flying senior side.

Jones looks one of the pick of the players coming through at the moment, and he’ll hope to soon replicate the success of academy product Trent Alexander-Arnold in the LFC first-team.