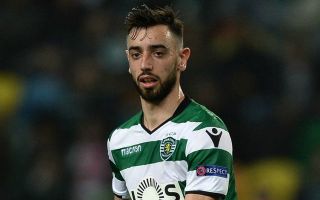 Super-agent Jorge Mendes has reportedly got involved in the potential transfer deal taking Bruno Fernandes to Manchester United this January.

The Portugal international has looked a hugely impressive talent in his time with Sporting, so it’s little surprise to now see talk of him potentially moving to a bigger club and a more competitive league.

MORE: What Bruno Fernandes could bring to Manchester United

According to the Telegraph, Fernandes wants the move to Man Utd, and he could be aided now by the well-known Mendes helping to broker this deal.

Mendes has represented a number of big names at Old Trafford down the years, so Red Devils fans can perhaps be optimistic that his involvement means this deal is now looking more likely than before.

Fernandes was notably linked with United throughout the summer, though the move never actually happened at that time.

Bruno Fernandes would be a fine signing for Manchester United

Now, however, speculation is really hotting up and the 25-year-old makes sense as a priority for Ole Gunnar Solskjaer and co. this winter.

Paul Pogba’s absence through injury this season has been a big blow for MUFC and a signing like Fernandes could really bring some much-needed quality into this team’s midfield.