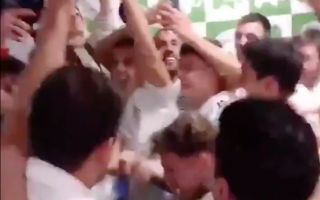 Segunda Division B side Unionistas de Salamanca will face Real Madrid in the Copa del Rey this month, and it’s fair to say their players are absolutely delighted.

The two sides will meet on January 22 as the hosts will undoubtedly be desperate to pull off a major upset and advance at the expense of the Spanish giants.

However, the mere fact that Real Madrid are coming to visit and even if they do rest key players, will be a huge deal for the club, community and region.

It will be made all the more sweeter if they can get a result, but based on the video below, it’s clear that the players are simply thrilled about the idea of facing their illustrious opposition.

Given that they’re currently in a scrap for the La Liga title and have the Champions League to think about next month, it wouldn’t be a surprise if Zinedine Zidane decided to rest several of his top players for the clash.

Nevertheless, such is the quality depth in his squad, there will no doubt be excitement about who features even from the home faithful, but the Unionistas players themselves will have a hard time trying to regain their composure and stay focused it seems!