The Red Devils are so far the only team who have been able to avoid defeat against Jurgen Klopp’s side, holding them to a 1-1 draw at Old Trafford a few months back.

SEE MORE: He could be an absolute United legend”- Manchester United star urged to stay at Old Trafford

Given their current form and the fact that this weekend’s match will take place at Anfield, Liverpool seem heavy favorites to bag all three points and continue their dominance at the top of the Premier League table.

Man United are in dire need of a win in order to keep their top four hopes alive. However, it will be very tough for them to beat the European Champions at Anfield, a ground where they haven’t lost a single league fixture since April 2017. The possibility of Marcus Rashford missing the game makes things even more difficult for Ole Gunnar Solskjaer’s side.

At goal, there’s little doubt that David de Gea will start. The Spaniard has kept only four clean sheets this season so far and it will be very difficult for him to have a fifth as he’ll be up against three of the world’s finest attackers.

Given his recent form and the fact that Luke Shaw is injured, Brandon Williams could get another start at left-back while Aaron Wan-Bissaka will be on the right. As in most of United’s matches, Victor Lindelof and Harry Maguire will be the centre-backs.

The injuries to Paul Pogba and Scott McTominay are big blows for the Red Devils but Nemanja Matic and Fred have benefited from that and should start in central midfield this weekend.

Solskjaer never said that Rashford would miss Sunday’s clash but there is a good chance the 22-year-old could be benched as a precautionary measure. In his place, Daniel James could start at left-wing while Mason Greenwood can be on the right with Juan Mata starting as an attacking midfielder ahead of Andreas Pereira.

A lot of hopes will be pinned on Anthony Martial, especially if Rashford doesn’t start. As in his previous fixtures, thhe Frenchman will start as a centre-forward. 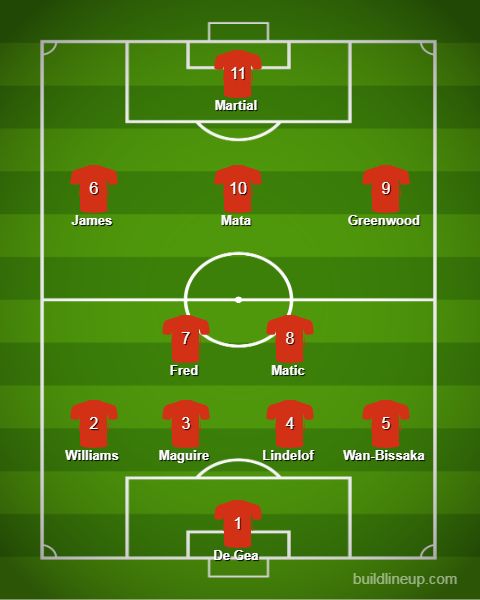