If there’s one thing that seems clear from this possible transfer, it’s that Ashley Young must have a fantastic agent.

You can never doubt his effort but he’s been a weak link in a very average Manchester United side for a while, and it seems like he’s now out of favour after Brandon William’s impressive introduction into the first team.

He’s now 34 so you might think he would have to drop into the Championship, but he’s just been spotted in Milan ahead of his impending move to Inter:

It’s great to see that foreign journalists must presume we always talk about the weather as a conversation opener, but there’s nothing overly interesting that comes out of that short exchange.

Fabrizio Romano tweeted to say that he was due to sign for Inter, so this footage only seems to confirm that:

It will be very interesting to see how he gets on. Inter are pushing for the title and it’s well known that Antonio Conte uses wing backs so he will have a slightly different role.

He’s not looked great at Old Trafford recently, but Conte is also the man who produced great performances from Marcos Alonso and Victor Moses, so he could be a useful addition. 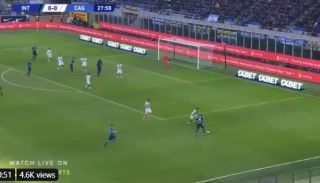