Barcelona will begin life under new coach Quique Setien this weekend when they face Granada at the Nou Camp on Sunday night.

The Catalan giants confirmed Ernesto Valverde’s exit earlier this week and swiftly made Setien his successor to try and lead them to a successful season and long-term future.

SEE MORE: Barcelona will need to loan out €7m signing IMMEDIATELY due to squad restrictions and possible Luis Suarez replacement

Having received praise during his time at Real Betis, particularly for the style of play his side adopted, it’s expected that the 61-year-old tactician will be a good fit for Barcelona as they look to get back to playing expansive and attractive football.

However, results will be the most important thing especially as they sit level on points with rivals Real Madrid at the top of the table after 19 games.

There will no doubt be a lot of intrigue over how Barcelona could line up in Setien’s first game at the helm, but there are certain decisions that will likely be taken out of his hands.

As reported by BBC Sport, Luis Suarez is out for around four months after undergoing knee surgery and so he won’t be available, while Ousmane Dembele is currently sidelined with a thigh problem and Frenkie de Jong is suspended.

Both Arthur and Marc-Andre ter Stegen have been struggling with knocks too since the start of the year, but as noted by the club’s official site, they could hand Setien a timely double boost as the pair have been training with the rest of the group this week.

With that in mind, the graphic below shows how Barcelona could look when they face Granada, although Setien won’t name his squad until Sunday morning, and so it remains to be seen who is included and in contention.

That said, many of the names below still pick themselves given the quality and talent that they possess, with intrigue in particular over how Lionel Messi will look under a new coach as the group as a whole could relish Setien’s approach and philosophy on how he wants his team to play.

Sport have gone with an almost identical XI if Setien chooses to stick with a 4-3-3 system, although they have thrown one surprise into the mix with talented starlet Riqui Puig potentially in line to get the nod in midfield. 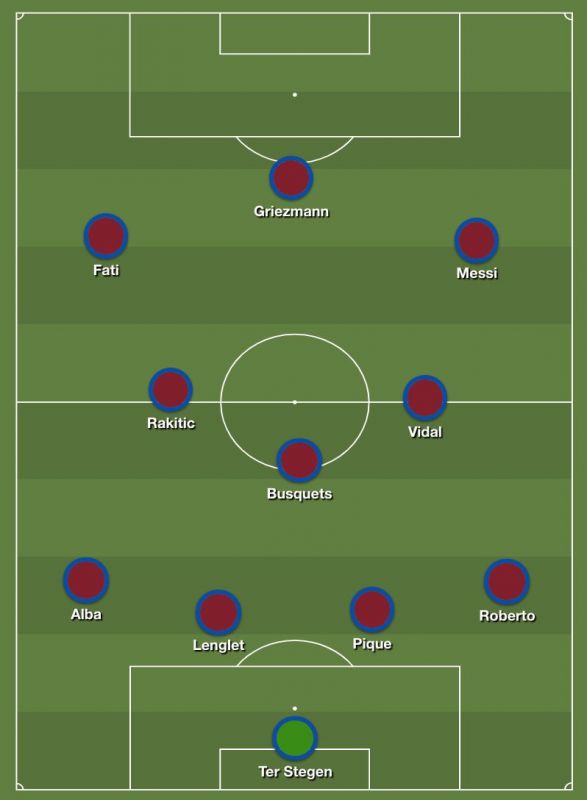