It’s quite difficult to come up with a combined Xi for any two teams and be subjective about it, there’s always a part of you that feels the need to be balanced and keep it fairly even.

Man United and Liverpool play this weekend, and it’s honestly pretty tough to make a case for any Man United players to actually feature in the team.

READ MORE: Manchester United could revive interest in long-term target as neither Inter Milan or his loan side want him

That certainly looked to be the case with Danny Mills, after he selected his combined XI for the fixture…: 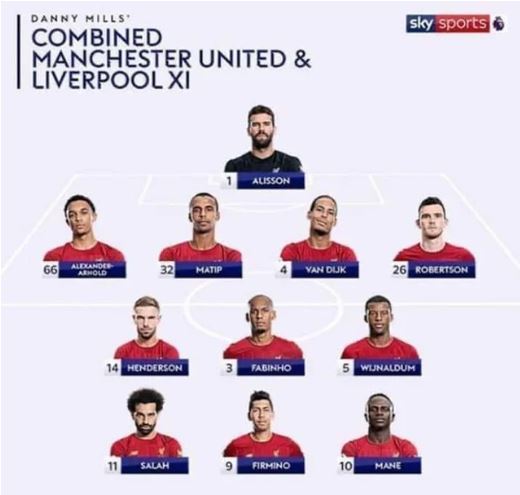 It seems ridiculous when you consider this is Manchester United we’re talking about, but when you start to look at it in more detail he’s got a point.

The current United team is lacking in talent in a lot of positions, with only Harry Maguire, David de Gea and Marcus Rashford having any sort of claim on this, but de Gea is living off his past reputation and Maguire is only mentioned because of the transfer fee.

There’s no doubt that David de Gea was one of the best keepers in Europe a couple of years ago, but he’s started to look shaky and he’s made some big errors lately. Alisson might be prone to a red card, but he’s the much better keeper for now.

Maguire did arrive with huge expectations from Leicester, but he looks slow and ponderous when isolated and hasn’t shown enough to suggest he’s better than the Liverpool duo.

Marcus Rashford is the one who’s had an outstanding season, and he probably would get the nod against any other team. The problem is that Liverpool’s front three are all world class talents and can’t be left out.

There are many examples of how far United have fallen in recent years, but this might be one of the biggest.