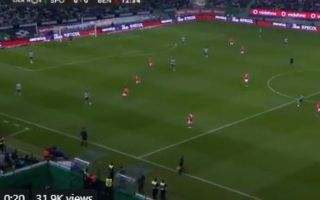 It still remains to be seen if Bruno Fernandes will make his much anticipated move to Old Trafford but if he does, you can be sure this isn’t the way he would want his Sporting career to end.

They went down 2-0 to Benfica last night in a game that many have speculated would be Fernandes’ farewell.

READ MORE: BREAKTHROUGH for Man United with Bruno Fernandes deal to be completed in HOURS

Obviously this won’t be a great consolation to him, but he did come up with a magic moment when his glorious pass took out the entire Benfica defence:

What a pass this is from Bruno Fernandes tonight. 60 yard through-ball with perfect precision #mufc pic.twitter.com/hBrcI06Krv

This moment shows exactly why he could be a great addition for United. Too often they take their time when moving the ball forward and the incisive pass isn’t there, but the movement and pace of Rashford, James and Martial coupled with balls like this could be devastating.