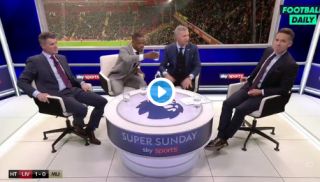 Patrice Evra could not resist a cheeky little dig at Graeme Souness after his passionate rant about VAR during Sky Sports’ half time analysis of the game between Liverpool and Manchester United.

Watch below as Evra can be seen laughing at Souness before checking his drink of water – presumably hinting that he wondered if there might be something stronger in there!

In fairness, Souness made a lot of good points about the poor decision to disallow a Roberto Firmino goal for Liverpool, but he could perhaps do it in less of a shouty old man way.

Evra, meanwhile, remains an absolute joker and a great watch whenever he’s on punditry duty!