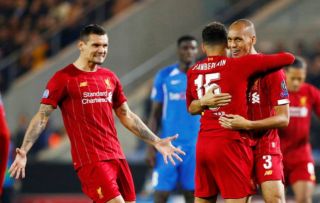 Liverpool midfielder Alex Oxlade-Chamberlain said that Fabinho’s return is a massive boost for the club.

The Brazilian international was one of the Reds’ most consistent performers of the season before an injury sidelined him for nearly two months. However, Fabinho has recovered and could feature in today’s clash against Manchester United at Anfield.

SEE MORE: Liverpool and Chelsea to battle it out for £60m Bundesliga star

Speaking ahead of the fixture, Oxlade-Chamberlain said that his return is a massive lift for the team. The England international told Liverpool’s official website: “It’s a massive lift for us. He is a crucial part of this team and he has proved ever since he has been here how good he is. Especially at the start of this season, up until unfortunately he got injured, he was absolutely brilliant – really pivotal in our team and our success. And someone that every week you could rely on to put in a really, really good performance.

“You see in glimpses how good he can be going forward; his passing, he often provides chances with balls over the top, the goal against Man City. He can really add in that department. Defensively, he has been brilliant. He’s a massive lift for us.”

Fabinho has so far made 19 appearances for Liverpool this season so far, scoring a screamer against Manchester City and providing two assists. The Brazilian was in terrific form for the Reds before he got injured and Jurgen Klopp will be delighted to have him.

There is a good chance of Fabinho starting in today’s match against Manchester United and will be expected to put on an impressive performance if he is in the lineup. A win for Liverpool today could see them take a 16-point lead at the top of the Premier League table with a game in hand.