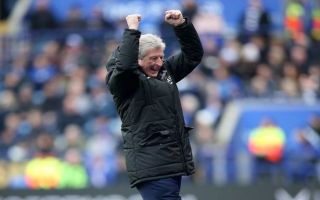 Crystal Palace have gone under the radar in recent years for being a solid club who get big results and often upset some of the bigger teams too.

It can’t be understated how impressive it is for a smaller side to properly establish themselves in the top flight, especially after they came close to being relegated to League One not that long ago.

Admittedly Roy Hodgson might not have the playing the most attractive brand of football, but he did a similar job at Fulham and Palace are only nine points away from Champions League football right now.

That might be a stretch to say they have any chance of pushing the top four, but it shows just how well they’re doing. Yesterday’s result against Man City completed an impressive run of results against the Manchester sides, and the club’s Twitter is making sure everyone is aware:

They also took a point away from The Emirates in a game that will go down is history for Granit Xhaka single-handedly trying to get Unai Emery sacked, so they’ve shown they’re a force to be reckoned with away from home.

City and United fans might not appreciate the red and blue comment, but Palace have earned the right to say it.