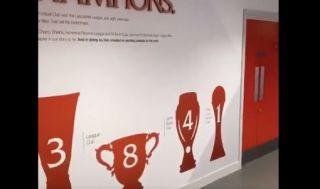 Manchester United legend Gary Neville gave Jamie Carragher the finger as he enjoyed a look at Liverpool’s trophy count on the walls of Anfield.

The pair are club legends at Man Utd and Liverpool, respectively, and have clearly been winding each other up ahead of today’s big game between these two Premier League giants.

Neville played a part in winning huge numbers of trophies for some of United’s best ever sides, but his club have gone into real decline in recent years while Liverpool are now on the up again.

Jurgen Klopp’s team will be the big favourites today, and Neville clearly wasn’t enjoying being wound up by his jubilant co-pundit ahead of the match… 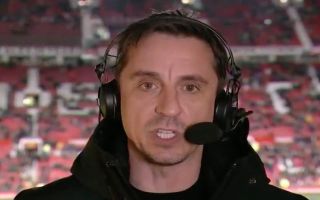