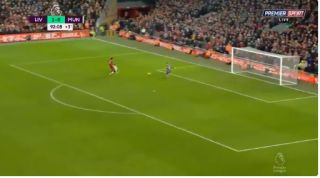 Mohamed Salah scored with one of the last kicks of the game to make it 2-0 to Liverpool against Manchester United this evening.

The Reds forward had earlier missed a great chance, but he’s made up for it now with a cool finish late on to wrap up another big three points for the league leaders.

What an assist from Alisson and what strength and composure from Salah ? pic.twitter.com/7grzjnU47l

Salah seals it at the death ?

Watch the goal video above as Salah races through on goal, using his strength to hold off the defender before showing his quality and composure with a cool, low finish past David de Gea.

Somewhat surprisingly, this was the Egyptian’s first goal against Man Utd in his Liverpool career!

Very much unsurprisingly, Anfield was absolutely roaring at this point, with LFC taking another step closer to ending 30 years of hurt…