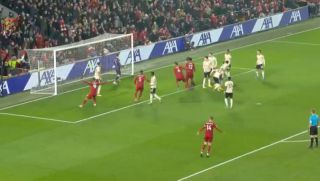 Virgil van Dijk has given Liverpool a 1-0 lead over Manchester United in this afternoon’s big Premier League clash at Anfield.

Watch the video below as the Reds defender heads in Trent Alexander-Arnold’s corner to give Jurgen Klopp’s men the early advantage after a fairly even start.

"It's the £70m man against the £80m man and the man who was actually cheapest came out on top."

Van Dijk does well to direct his header into the back of the net, but it’s yet another assist from right-back Alexander-Arnold, who whips in a fine corner to create the opportunity.