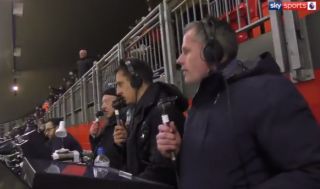 There was a lovely little moment spotted by the Sky Sports cameras after Mohamed Salah’s goal to make it Liverpool 2-0 Manchester United yesterday.

Watch below as Carragher can be seen quietly singing along with the home crowd at Anfield as they chant “We’re gonna win the league, and now you’re gonna believe us”.

Recap #LFC's win over #MUFC in less than a minute! ?@Carra23 and @GNev2 watched on as goals from Virgil van Dijk and Mohamed Salah extended Liverpool's incredible lead at the top of the Premier League table! ??

What was your moment of the match? ? pic.twitter.com/t3T8U5azg8

The way the former Reds defender, on co-commentary duty alongside Martin Tyler and Gary Neville at the time, moves his microphone away so his singing doesn’t get picked up, is genuinely quite sweet to watch.

The Liverpool legend must be loving this season, with his old club looking set to finally end their long wait for a league title after going a whopping 16 points clear after their victory over United on Sunday.