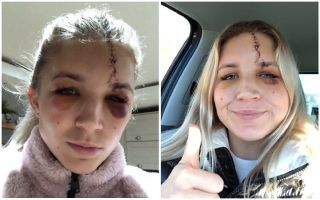 Liverpool Women goalkeeper Fran Kitching has revealed why she was absent for her side’s clash with Bristol City Women on Sunday.

The Reds won the game courtesy of a first-half goal from Rachel Furness, but they did so without Kitching between the posts.

As seen in her Instagram post below, the reason for that absence has now been revealed as she suffered a horrendous cut to her forehead in training which clearly required plenty of medical attention.

Fortunately, she notes in her caption that she’s now feeling a lot better and is ready to get back to training, but that is one serious scar she will no doubt be left with in the coming weeks and we wish her a swift and full recovery from the blow.