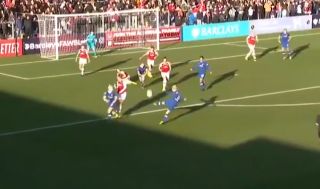 Chelsea star Sophie Ingle scored one of the goals of the weekend for the Blues’ Women’s team as they earned a surprise victory over Arsenal Women.

Watch below as the Wales international catches this volley perfectly to guide it into the top corner from outside the penalty area.

When it gets @didierdrogba's approval, you know it's a good one ?#BarclaysFAWSL x @sophieingle01 pic.twitter.com/G1kgIRET1z

This is a truly sublime finish from Ingle, whose strike made it 3-0 to Chelsea after just 20 minutes against Arsenal.

They went on to win 4-1, knocking the Gunners off the top of the table in the Women’s Super League and putting them just a point behind their opponents in third place.