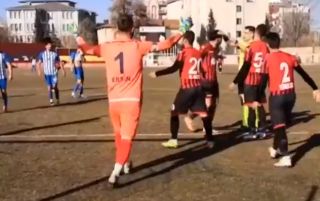 Watch below for one of the most incredible ends to a game we’ve ever seen, in a viral clip from the Turkish second tier.

As noted in this tweet from Goal, a goalkeeper saves a 90th minute penalty before being booked for moving off his line.

With the penalty retaken, he saves it again, only to be sent off for a second yellow card for once again moving off his line!

Madness in the Turkish second tier ?

But he's booked for coming off his line ?

He's booked again for leaving his line! Sent off! ?

Next, one of the team’s defenders goes in goal, and once again manages to save the penalty – fairly on this occasion!