Marca claim that the Spain international would adapt well to new boss Quique Setien’s style of play, Rodrigo has been one of La Liga’s top forwards for the last several years, this move seems wise.

It’s added that Valencia’s €60m price-tag for the ace could hinder the chances of a move. It could be difficult for the Blaugrana to find a top striker at the mid-season point without having to pay above the odds.

Rodrigo’s style of play could certainly yield the best out of Barcelona’s star attackers like Lionel Messi, Antoine Griezmann and Ousmane Dembele.

The Spaniard has proved to be very selfless this season, scoring just 4 times – but registering 10 assists in his 22 appearances across all competitions.

As well as being in a closely-contested title race with rivals Real Madrid this season and the expectation from fans for the side to make things right in the Champions League this term – should the Camp Nou outfit break the bank to land a forward in the January transfer window? 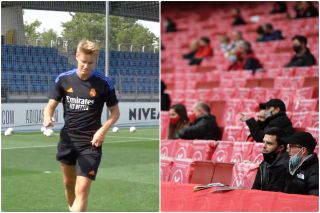