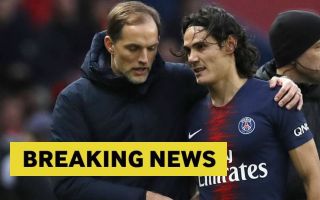 The Uruguay international has been repeatedly linked with a move away from PSG this month, with club chief Leonardo recently confirming he’d handed in a transfer request.

Cavani could be an ideal signing for Man Utd right now due to the recent injury to Marcus Rashford and their lack of other reliable options up front.

Luckily for the Red Devils, it seems PSG boss Tuchel is not optimistic of keeping Cavani beyond this January’s transfer window.

“I am not sure that Edinson Cavani will be here in February,” the German tactician said after his side’s win over Lorient.

Cavani has been a prolific scorer throughout his career in Europe, and is currently PSG’s all-time leading goal scorer with 198 goals in 292 appearances in all competitions.

United don’t really have anyone with that kind of pedigree, and even though Cavani is now 32 years of age, he surely still has a few years left in the tank.

As a cheap, short-term option, the South American poacher seems an ideal fit for MUFC right now and Tuchel’s words should only encourage Ole Gunnar Solskjaer, Ed Woodard and co. to make a move.