Manchester United legend Gary Neville has criticised the performance of Aaron Wan-Bissaka in the defeat to Liverpool at the weekend.

The young right-back has generally been pretty solid since his summer transfer to United from Crystal Palace, but this was undoubtedly one of the harder tests he’s faced in his career.

Liverpool dominated at Anfield in their Premier League clash on Sunday, winning 2-0 in the end, though it could easily have been by more.

Discussing Wan-Bissaka’s performance on commentary with Sky Sports, as quoted by the Daily Mirror, Neville was not exactly complimentary.

He said: “Wan-Bissaka has had a good introduction at Manchester United. But I remember I had a couple of games here [at Anfield] as a right-back where I thought it was a different level.

“I used to play against Arsenal with [Ashley] Cole, [Thierry] Henry and [Robert] Pires and you felt like you were on the waltzers – he’s on the waltzers, Wan-Bissaka!

“He’s spinning everywhere. He hasn’t got a clue what’s going on in this game at the moment. But the play from Liverpool down that side is outstanding, and this is a different level for that lad to cope with.”

United fans will hopefully have a little sympathy for Wan-Bissaka, who, despite a torrid afternoon against Liverpool, has shown plenty of potential this season.

Still only 22 years of age, the England youth international will surely improve as time goes on, while he’s also not been helped by having to come into what has been a generally dysfunctional club for some time anyway. 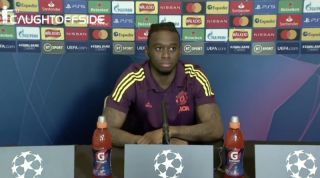