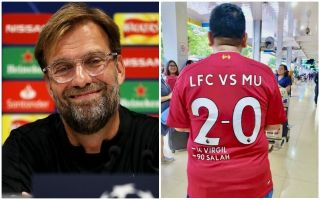 A post on social media shows one football fan’s hilarious attempt to troll Manchester United after they were defeated by Liverpool on the weekend.

Simon N’s decided to get a personalised shirt that celebrates the Merseyside outfit’s 2-0 victory over the Red Devils. We haven’t seen something like this before.

The Liverpool Echo report that Simon Nainggolan is an Indonesian entrepreneur that helped broker a deal between Tranmere Rovers and the Santini Group back in September.

Simon’s shirt has ‘LFC VS MU’ at the top – where you’d usually find one’s name.

The shirt also has ‘2-0’ where we’d usually see a number and it even states the names of Virgil van Dijk and Mohamed Salah, as well as the minutes they scored in.

The Liverpool Echo also add that it’s unclear whether Nainggolan is actually a Liverpool fan, perhaps he just doesn’t like Man United.

Take a look at Simon’s savage shirt below:

The length that Simon has gone to get one over Manchester United is amazing. Will we start seeing more shirts like this in the future?