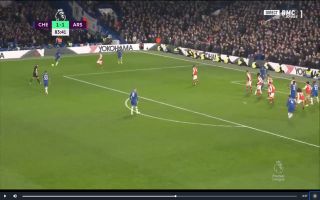 In the 83rd minute of this evening’s mammoth encounter between Chelsea and Arsenal, the Blues took the lead after a clever quickly-taken corner.

The Blues caught Arsenal’s defence off guard with their short corner and Callum Hudson-Odoi whipped a low cross into the box that evaded everyone.

Cesar Azpilicueta was on hand at the near post to tap the ball into the back of the net.

Take a look at the club captain’s goal below:

Azpilicueta has showed on several occasions that he has a killer instinct in situations like this.