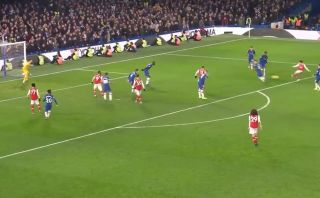 Arsenal wouldn’t go down without a fight on Tuesday night as they drew level against Chelsea late on through Hector Bellerin’s strike.

Jorginho had given the hosts the lead at Stamford Bridge just before the half-hour mark as the Gunners were reduced to 10 men with David Luiz given his marching orders.

However, they struck back in stunning fashion in the 63rd minute as Gabriel Martinelli caught Chelsea out on the counter-attack and produced a composed finish to make it 1-1.

Cesar Azpilicueta arguably thought he may have won it for the Blues with his late effort, but it wasn’t to be as Bellerin scored just minutes later to give Arsenal a share of the spoils.

As seen in the video below, while question marks will no doubt be raised over the defending from Chelsea as they failed to close the Spaniard down, he did brilliantly to bend his effort round the defender and Kepa to find the corner of the net.

Arsenal are still well off the pace in the battle for a top-four finish in the Premier League, but this is no doubt an excellent point for Mikel Arteta’s men.

Arsenal's captain for the night rescues a point for the visitors with a stunning effort!

What a moment for him! pic.twitter.com/tGc190cqp2

WHAT IS HAPPENING, BELLERIN LEVELS IT ?? pic.twitter.com/xa9BA6xPTv

10-man Gunners save a point, and it was a peach from Hector Bellerin.#CHEARS #PremierLeague #OptusSport pic.twitter.com/LgaMdxe77s