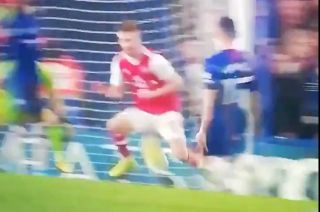 Arsenal defender Shkodran Mustafi put his body on the line for the cause in their clash with Chelsea at Stamford Bridge on Tuesday night.

After some brilliant build-up play from the hosts as they carved the Gunners open down the right flank, they created a chance inside the box which looked very threatening as Mateo Kovacic’s effort looked like it could have been heading towards the back of the net.

However, as seen in the video below, they didn’t count on Mustafi willing to take one for the team as the German defender took a hit in a delicate area all for the Arsenal cause of protecting their clean sheet.

It remains to be seen whether or not that proves to be a decisive moment in the game, but after a few minutes laid out on the pitch, Mustafi was able to regather himself and continue to keep Chelsea at bay in a thrilling start to the showdown.

As the replays showed though, this one will have all men wincing in pain as we know just how painful this can be…

Don't tell me Mustafi has no commitment ????? #CHEARS pic.twitter.com/Gkg0D6bCKh