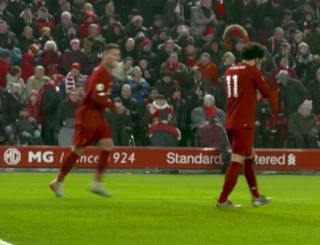 Liverpool secured a 2-0 win over rivals Man Utd at Anfield on Sunday as they continued their relentless march towards the Premier League title.

Jurgen Klopp’s men now sit 16 points clear at the top of the table and have a game in hand on their nearest rivals as they show no signs of slowing down this season.

The win over United could have been even sweeter had Mohamed Salah finished the chance below, but he somehow managed to miss the target.

It didn’t matter too much in the end as the Egyptian international got his goal and secured all three points, but ultimately he will kick himself for not putting this one away.

However, it appears as though Firmino found the funny side of it. As seen in the video below around the 9 minute, 30 seconds mark, some eagle-eyed fans have spotted the Brazilian having a chuckle after the miss.

Naturally, he will have been disappointed not to see Salah find the back of the net, but such is the enjoyment that Liverpool are playing with currently, he could afford to laugh it off as they will have been confident of finding another goal soon after.

Firmino continues to play a pivotal role for Liverpool himself, and so this will only further endear him to the Reds faithful…