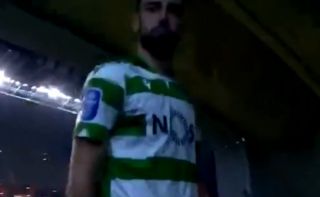 It’s fair to say Bruno Fernandes raised one or two eyebrows with his antics at the end of Sporting Lisbon’s defeat to Braga last night.

The Portugal international was on the end of a 2-1 defeat in what might be his Sporting farewell as transfer rumours linking him to Manchester United continue to intensify.

Bruno Fernandes doesn’t wave goodbye to the fans, but instead punches the camera in the tunnel.

The Daily Mirror are among the sources to state that the Fernandes to Man Utd deal seems to have reached a breakthrough, but for the time being the 25-year-old did not look a happy man last night.

Watch the video above as Fernandes storms off at the end of the defeat to Braga, failing to acknowledge the club’s fans and shoving a TV camera.

United fans will just hope he can make his way to Old Trafford soon and put this disappointment behind him.

The 25-year-old looks a potentially world class talent who’d undoubtedly strengthen what has been an area of weakness in Ole Gunnar Solskjaer’s squad in recent times.