The Kylian Mbappe celebration is becoming increasingly popular, it would seem, with the Paris Saint-Germain star not just a great footballer but a real trend-setter.

Arsenal striker Gabriel Martinelli has become the latest player to fold his arms Mbappe-style after his goal away to Chelsea in last night’s Premier League clash at Stamford Bridge.

Interestingly, however, he took the cue from a fan in the away end, as you may be able to see in the clip below, and as we’ve circled in the photo above…

Check the dude in the crowd with the light grey top on, he folds his arms and Martinelli picks up on his cue and does it too. https://t.co/AM1Na48jYp

A fan in a grey top folds his arms and clearly catches Martinelli’s eye, with the Brazilian youngster copying him just seconds later.

Alexandre Lacazette then came along to join him, as Arsenal celebrated their first equaliser against Chelsea. 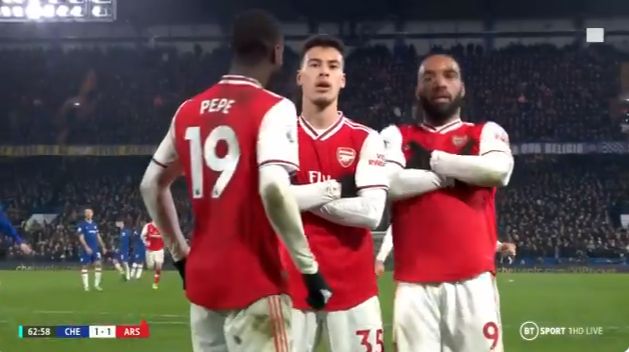