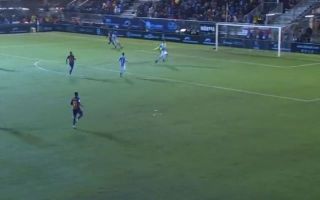 There’s never a good way to lose a big game, but you have to think a smaller team in the cup would rather take a routine defeat than have the hope of pulling off the shock.

Ibiza actually led Barcelona for most of the game tonight, but Antoine Griezmann struck with a late equaliser and then his fine finish deep into injury time meant that Barca will go through to the next round:

The Ibiza players can leave with their heads held high and it might give the team some exposure going forward, but it will be little consolation after losing the tie in such a heartbreaking manner.