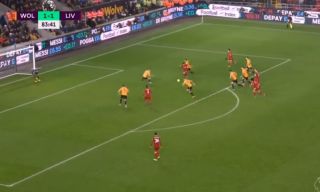 Roberto Firmino may have won it late on for Liverpool against Wolves tonight with a well-worked goal to make it 2-1.

Watch below as the Brazil international makes no mistake with an emphatic finish into the top corner with his left foot, following a clever pass from captain Jordan Henderson.

The England international reacted well as Mohamed Salah lost the ball, as he played a first-time pass right into Firmino’s path.

From there, Firmino made no mistake and restored Liverpool’s lead at Molineux after what had been a rather nervy second half for Jurgen Klopp’s side.