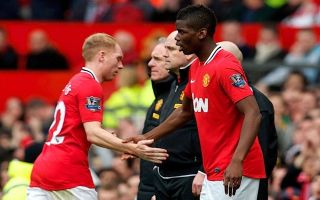 The midfielder has been struck with injury troubles for most of this season, the Frenchman is currently sidelined with an ankle injury.

Scholes believes that Pogba will be ‘moaning’ about ‘something else’ once he recovers from is knock in a bid to ‘try to get his move away’ from the Red Devils.

Pogba has arguably failed to live up to expectations since his marquee return to Manchester, but hardly much more than other United stars – Scholes’ criticism of the enigmatic star seems harsh.

Will Pogba prove himself as one of the world’s best midfielders when he returns to action?

Here’s what Scholes had to say on the World Cup winner:

“I don’t think Pogba is on his way back [from injury] and even if he is on way back, he’ll be moaning about something else to try and not play – try to get his move away from the club,”

“We keep going on about the players that are missing but that squad of players, that team tonight, should be enough to beat Burnley.”

“I fear for the next four-or-five weeks because I don’t think any of them players are coming back quickly.”

Read More: Opinion: The Glazers need to be more greedy – and get a proper board in place.

Perhaps Pogba is being made a scapegoat by the media, whilst his performances have left a lot to be desired for, it’s disappointing to see that it’s his name in the headlines after a defeat when he didn’t even play.

Ole Gunnar Solskjaer’s side missed a glorious opportunity to cut the gap between themselves and fourth-placed Chelsea, could Pogba’s return – whenever that may be – spark an uplift in form for the inconsistent Red Devils?