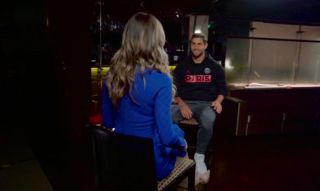 San Francisco 49ers quarterback Jimmy Garoppolo has caused a bit of a stir after being spotted wearing a PSG x Jordan hooded sweatshirt during an interview.

The 49ers will be in action against Kansas City Chiefs in the Super Bowl LIV on Sunday 2nd February in what promises to be an intriguing clash and one that will no doubt attract plenty of punters, particularly with the potential of a bet365 bonus to help you win big.

However, Garoppolo’s little stunt may well hint at something just as fascinating that might be about to unfold in the footballing world as well.

One PSG blog has speculated about how this might affect their club, following recent talk of the Ligue 1 giants’ wealthy Qatari owners possibly investing in Championship club Leeds United.

The Elland Road side could be heading for Premier League promotion by the end of this season after a strong showing so far this term, and they remain a team with great history, even after a long spell out of the top flight following their relegation on the back of major financial woes back in 2004.

49ers owner Dr John York currently has an investment in Leeds, so there may well be a connection here that points towards PSG’s owners also getting involved.

This would be interesting to see, with Leeds thought to be regarded highly by club chairman Andrea Radrizzanni, who has said he feels investment from Qatar could lead the club to be able to compete with Manchester City.

City have been a huge success story since their takeover by the Abu Dhabi United Group back in 2008, and PSG have of course gone down a similar route in the same period.

This has allowed two previously small teams to sign many of the best players in the world and become a global force in the game, winning numerous big trophies and growing as brands.

Leeds fans will no doubt be hugely excited at the prospect of possibly following them if there is indeed any strength to the claims being made here.

After years in the wilderness, LUFC supporters may well feel this is what they deserve after some difficult times and a great amount of patience as their club has worked its way back to the top.

It’s less good news, however, for the likes of Arsenal, Chelsea and Manchester United – three of the more established big boys of the Premier League era who are already miles behind Man City, and now Liverpool.

Throwing Leeds into the mix could make it even harder for these clubs to get back to the glory days, though of course we are surely a long way from that at this point anyway.