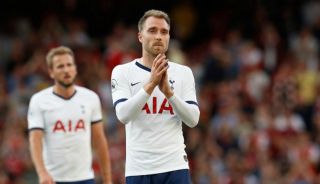 Tottenham ace Christian Eriksen is reportedly on the verge of sealing a move to Inter this month, and he could pen a lucrative new deal.

The 27-year-old has struggled to re-discover his best form so far this season, as he has managed just three goals and three assists in 28 appearances.

Further, with his current contract set to expire this summer, it has raised question marks over his future in north London beyond the end of this campaign.

According to Sky Sports, it has been suggested that he could be closing in on a €20m move to Inter this month, with Spurs avoiding the blow of losing him for nothing this summer and cashing in while they can.

Joining the Italian giants is a major move in itself as Antonio Conte has them challenging Juventus for the Serie A title this season and they continue to improve the squad after signing the likes of Stefano Sensi and Romelu Lukaku last summer.

However, it’s added in the report above via reporter Kaveh Solhekol, that aside from the €20m fee, Eriksen could be set to treble his wages in a significantly lucrative new contract.

“Our information is that the deal hasn’t been done yet, but our colleagues at Sky Italy believe it is almost agreed. They say it is going to be a €20m deal and that Christian Eriksen is going to treble his wages,” he is quoted as saying.

That is a huge amount of money that Inter are ready to invest in Eriksen, and so clearly they are confident that he can play a major role in their pursuit of trophies and success moving forward.

Time will tell when an official announcement arrives, but Sky Sport Italia suggest that Eriksen could be in Italy early next week to complete the formalities of the move.