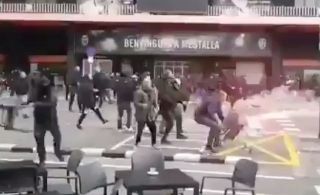 Barcelona and Valencia square off at the Mestalla on Saturday, but sadly it’s reported that some of their fans have clashed outside of the stadium already.

As seen in the video below, it appears as though fans from either side have clashed ahead of kick-off as footage has been shared on social media.

It’s added that damage has been caused to buildings and businesses as a result of the clashes, and as can be seen in the clip, chairs and other objects are being used by the ultras to throw at their rivals.

While this will now sadly overshadow the build up to the game, it’s hoped that no serious injuries are suffered and that the authorities take the relevant action to ensure that there is no repeat of this moving forward.

Per sources at Mestalla, ultra fans of Valencia & Barcelona have clashed outside the stadium ahead of today’s game.

Around 100 Boixos Nois were present at the scene, and members of the Yomus group.