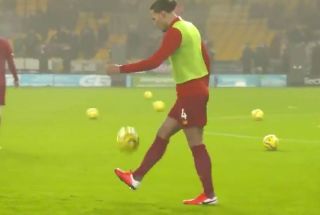 Virgil van Dijk has deservedly received plenty of praise since his Liverpool move, and it just seems to come so easily for the Dutchman.

From his commanding defensive displays to chipping in with key goals, he has been a pillar of the Reds side that is seemingly just a matter of months away from ending their long wait for a Premier League title this season.

Having been instrumental in their success last year, the Merseyside giants look set to follow it up with more silverware this season, and such is the relaxed atmosphere within the squad, we were all treated to some fine skills from Van Dijk in midweek.

As seen in the video below, the defensive rock was busy showing off some superb skills during his pre-match warm up ahead of facing Wolves at Molineux, and he even showed off the precision of his passing by hitting the crossbar from distance.

It literally looks as if he could do this stuff with his eyes closed, and while Liverpool fans are unsurprisingly loving the clip, they’ll hope he can continue to lead them to more success in the not too distant future.