In an interview with SportBible, Liverpool star Fabinho has revealed that the potential arrival of Kylian Mbappe would give Jurgen Klopp a selection ‘headache’.

Mbappe has already established himself as one of the best players in the world at the age of 21, we’re sure that the chance to have the Frenchman at Anfield would be a welcome ‘headache’ for Jurgen Klopp.

Fabinho reiterated that Liverpool’s attacking force of Sadio Mane, Mohamed Salah and Roberto Firmino is ‘very good’, the midfielder did add that Mbappe would ‘improve any team’.

Unfortunately for some Reds that may become excited about the prospect of seeing Mbappe in a Liverpool shirt, this transfer doesn’t seem too likely right now.

Goal claim that the Frenchman’s signature would cost around a whopping £250m. 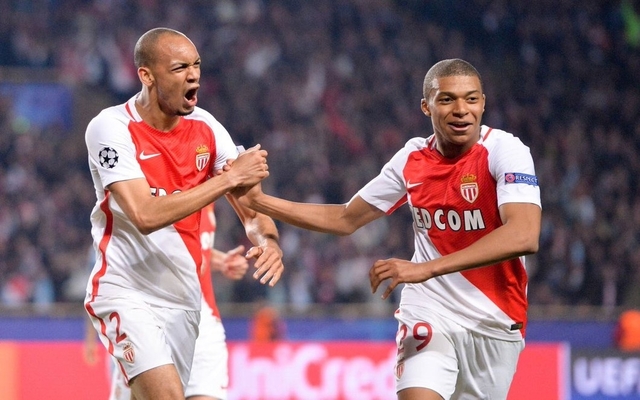 Fabinho and Mbappe at Monaco.

Here’s what Fabinho had to say on Mbappe’s possible arrival at Anfield:

“At this moment it would be a headache for Liverpool if we had him here because our attacking trio is very good.”

“But I know Mbappe’s quality, he’s already one of the best players in the world, so he would obviously improve any team.”

“Right now he plays for Paris Saint-Germain and we have to respect that.”

Read More: Fabinho ‘would like to welcome’ Kylian Mbappe to Liverpool in the future

Fabinho was teammates with Mbappe at Monaco, the duo’s impressive performances helped the side win a memorable Ligue 1 trophy ahead of rivals PSG.

Mbappe is tearing things up in France at the minute, with all respect to the country’s top-flight it would be interesting to see how the lightning-fast forward would fare in one of Europe’s other top five leagues.