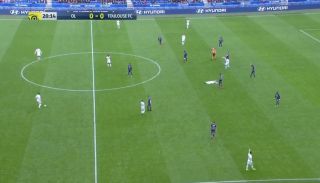 During Lyon’s Ligue 1 game with Toulouse on Sunday afternoon, Martin Terrier collapsed to the floor with no one close to him, sparking panic amongst his team-mates.

Fortunately, the French club have since confirmed, per the Metro, that the player has regained consciousness.

The incident occurred in the 20th minute of the match at the Groupama Stadium, and though play wasn’t immediately stopped, the seriousness of the situation soon became evident and medical staff rushed to his aid.

Clearly unable to continue, Terrier was stretchered off and replaced by Karl Toko Ekambi.

Lyon were quick to put supporters minds at ease by releasing a statement on Twitter at half-time.

‘Martin Terrier was the victim earlier of a fainting incident,’ it read.

‘Our player is better and has regained consciousness.’

Martin Terrier was the victim earlier of a fainting incident; our player is better and has regained consciousness.#OLTFC pic.twitter.com/Jb74L2f5cM

Yet to make his full debut for the French senior side, Terrier has starred for France’s U21 team.

However, his international and club aspirations may have to be put to one side until it’s been ascertained whether the fainting was a one-off occurrence or there is a more serious underlying problem.