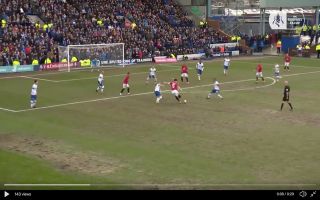 In the ninth minute of Manchester United’s FA Cup 4th round clash against Tranmere Rovers, the Red Devils took the lead after a sensational strike.

Harry Maguire picked up the ball and beat a defender before blasting the ball into the top corner with a superb effort from the edge of the box.

Tranmere’s goalkeeper had no chance of stopping this thunderous strike.

Take a look at United’s superb opener below:

WHAT A WAY TO SCORE YOUR FIRST @ManUtd GOAL ?#EmiratesFACup #TRAMUN pic.twitter.com/pdp0Pr6CaZ