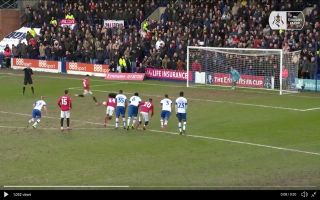 In the 55th minute of this afternoon’s FA Cup 4th round clash between Manchester United and Tranmere Rovers, the Red Devils were awarded a penalty after Tahith Chong was brought down whilst attempting to round the keeper.

18-year-old ace Mason Greenwood stepped up to take the spot-kick and showed off his brilliant talent by scoring a penalty with his apparently weaker right foot.

The England youth international sent the goalkeeper the wrong way with a stone-cold effort.

Take a look at the starlet’s spot-kick below:

Greenwood told the Manchester Evening News that he actually takes penalties with his so-called ‘weaker’ right foot because he once missed a spot-kick with his left in an Under-13s Manchester derby.

The Red Devils have an exciting talent on their hands in Greenwood.