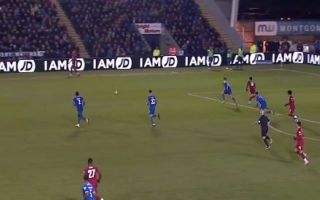 It’s fairly clear why the new rule was brought in that forced players to leave at the nearest side of the pitch rather than going to the dugout.

There was nothing more frustrating as a fan than seeing a player charge around the pitch all day with limitless energy, but all of a sudden that 30 yard walk to the touchline became a struggle. If you were really lucky, they would go down at one point and feign an injury as well.

READ MORE: Report shows just how much FA Cup replay vs Liverpool will help Shrewsbury off the pitch

There is one major flaw to this rule, as Mo Salah found out today:

Salah passed the ball to Matip who he replaced moments ago. pic.twitter.com/W5daLTwwjQ

Perhaps they will need to put bibs down or instruct players to take their shirts off when they leave the pitch, but they get booked for doing that after scoring so it could become a farce.