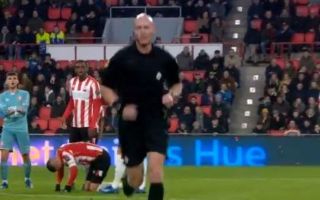 You have to think that if a ref had to make sure he remembered to take one thing with him onto the park, it’s his red and yellow cards.

Everything else can be handed to him at the side of the pitch, but nothing will make you look more foolish than going to book someone, only to realise you don’t have your cards on you.

That happened during PSV vs Twente today and the ref looks very sheepish as he trundles off to the sideline to pick up some spares:

It turned out he would need both cards later in the game as he dished out a red to former Barcelona midfielder Ibrahim Afellay.

Surely he won’t make this mistake again after this.