It’s starting to look like some of the game’s best players are taking a different route when it comes to winding their career down.

Plenty will still move to the Middle-East or MLS in search of one last payday, but it’s becoming more common for some players to go for a footballing adventure rather than just taking the cash.

Daniel de Rossi went to Boca Juniors while Andres Iniesta went to Japan. It’s not as if they weren’t paid well in those countries, but it did buck the trend of recent years.

It now sounds like there could be a gathering of former Barcelona players at Vissel Kobe, with The Sun quoting a report from Goal which suggested Chelsea forward Pedro was being linked with a move to the Japanese side. 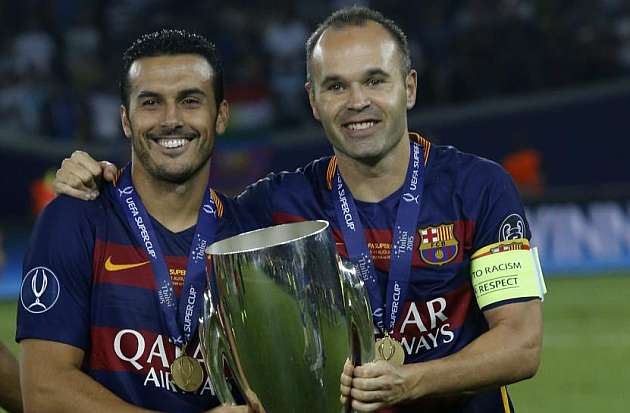 Pedro and Iniesta at Barca

If he did move then he would link up with former teammates Iniesta and Sergi Samper. Samper’s move to Japan was especially interesting as he’s only 25 and was once considered a big talent by Barca, but his career started to tail off.

Pedro isn’t really needed at Chelsea any more so it’s not clear if he would move now or when his contract expires in the Summer, but it would be interesting to see him and his former teammates playing together once again.