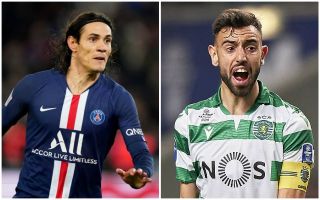 Manchester United are reportedly not close to getting any signings done, in a transfer news update that will likely infuriate many of their fans.

The Red Devils have, as ever, been linked with plenty of big names in recent times, but there’s not long left now for them to get in the players they so badly need after a difficult first half of the season.

According to The Athletic, United have held some talks over signing Edinson Cavani from Paris Saint-Germain, with manager Ole Gunnar Solskjaer keen to strengthen up front due to the recent injury to Marcus Rashford.

However, it seems Cavani is more likely to join Atletico Madrid instead, with Man Utd said to have been unconvinced by the cost of the deal and of the Uruguay international’s recent injury record, according to The Athletic.

The report adds that MUFC also remain in talks over signing Sporting Lisbon attacking midfielder Bruno Fernandes, but that no deals are currently imminent at Old Trafford.

The Fernandes saga has dragged on and on for some time now, and fans must be growing frustrated at their club’s apparent inability to get signings done even when it seems fairly straightforward.

A Bola suggest a deal can be done for relatively cheap at around €70million, and it doesn’t exactly seem like other top clubs are fighting for the Portugal international’s signature.

If United end this transfer window without any new additions it really will reflect very badly on the club when they’re down to the bare bones and facing a real fight to win a trophy or make the top four.