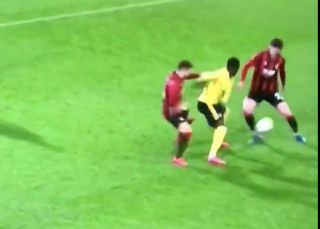 With the ball dropping at the edge of the box on the right flank, Pepe found himself surrounded by Bournemouth defenders with his back to them and the goal.

However, the Arsenal record signing dragged the ball back with his left foot and nutmegged the Bournemouth defender who was bearing down on him to find some space and unleash a shot into the side netting.

He’ll be disappointed he couldn’t find the finish, but he left three defenders behind to show what he’s capable of with the ball at his feet.

It was a brilliant piece of skill by Pepe as Arsenal lead Bournemouth 2-0 in the FA Cup as they hope to make it through to the fifth round.