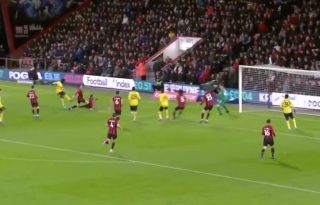 Arsenal wasted little time in breaking the deadlock in their clash with Bournemouth in the FA Cup on Monday night, with Bukayo Saka putting them ahead.

The Gunners started brightly as they look to secure their place in the fifth round of the FA Cup, and it took just five minutes for them to find a breakthrough.

As seen in the video below, there was wonderful build-up play as Joe Willock broke from midfield into space and fed the ball into Gabriel Martinelli’s feet in the box.

The Brazilian quickly laid it off to Saka on the left side, and the youngster produced a stunning finish to find the back of the net while giving the goalkeeper no chance.

It was an ideal start for Mikel Arteta and Arsenal, and they’ll be hoping to build on that now to make it a comfortable night’s work by putting the game to bed as soon as possible.

GOAL! Arsenal lead after 5 minutes and it's the young prospect Buyako Saka! It's a very fine finish from the Arsenal forward after a very fine Arsenal move including Willock and Martinelli as well.#BOUARS #FACup pic.twitter.com/YwdsnKBGX5

What a hit from Saka!

A well-worked move from Arsenal and the youngster crashes it home with real venom!

Travers had no chance ? pic.twitter.com/IHS63GNZhl