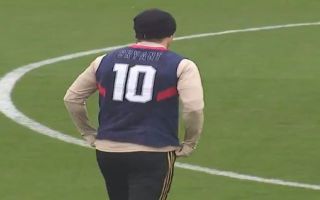 The past 24 hours has really shown just how important Kobe Bryant was to so many different people.

Usually a death of a major sports figure would result in lots of tributes within their own sport, but dedications to Kobe have been seen all over the world.

We’ve seen plenty of footballing figures looking to show their appreciation for the great man too. Neymar dedicated a goal to Bryant last night, and Sergio Ramos took to Real Madrid training wearing a USA Olympic jersey with Bryant’s name on the back:

As well as his incredible NBA achievements, Kobe was known as a two time Olympic gold-medalist and an all round great guy, so it’s incredibly sad to hear about his passing.

The continued tributes show just how much he meant to everyone.